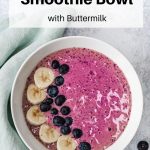 This simple banana and blueberry smoothie bowl makes a delicious snack, breakfast or even healthy dessert. It's easy to make with just three ingredients including buttermilk. Your kids will love it too!

This banana and blueberry smoothie bowl must be one of the quickest recipes I’ve ever made. As long as the banana has been frozen in advance, it only takes a minute to prepare.

When I first made this buttermilk blueberry smoothie I'd had no plans to make it. I just had ripe bananas and buttermilk that needed to be used up. They would also have been great in a banana bread but somehow I ended up putting them in this smoothie instead.

Except, I didn't call it a smoothie. When I first published this recipe I called it a soup: banana and blueberry soup!

But isn't it a smoothie bowl?

Yes, and smoothie bowls have exploded in popularly over the last few years. I'm sure if I'd titled this post a year later I'd have called it a banana and blueberry smoothie bowl! I'd also have added a few more toppings!

What ingredients do you need to make this blueberry buttermilk smoothie bowl?

This smoothie bowl is super simple. You only need three ingredients:

What toppings could you put on this blueberry smoothie?

First off, just let me say you don't need any extra toppings for this buttermilk smoothie bowl. It's lovely and simple just as it is. However, if you want to add some then do go ahead.

Banana slices, fruit slices of any kind such as peaches or apple or more berries would also be great on this smoothie bowl.

For some extra textures you could add some nuts, seeds, coconut or dried fruit.

How could you adapt this smoothie bowl?

I always think it's best to stick loosely to a recipe. If you like a really thick smoothie bowl then use less buttermilk. If you want a thinner smoothie then add a little bit more.

If you don't have frozen bananas, use fresh ones. The buttermilk will be from the fridge so will chill the smoothie anyway. Or just add a few ice cubes.

What can you use as a substitute for buttermilk?

In this smoothie bowl, yogurt, keffir, milk or a dairy free milk would all work.

Why use buttermilk in a smoothie?

Well, firstly, why not? It's delicious and if you like a slight tang in your drinks then you will definitely enjoy it!

Buttermilk is a really nutritious ingredient too and amongst other things a good source of protein, calcium, and riboflavin.

A great fruit recipe for kids

If your kids love smoothies then I'm sure they'll love this one too. When I first made this Master Spice was just one year old and it was a big hit! I even put some in a Nom Nom Kids Reusable Food Pouch for him! 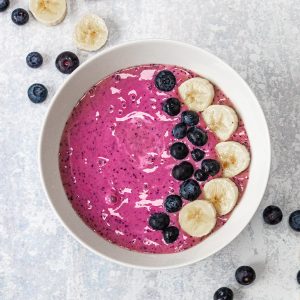