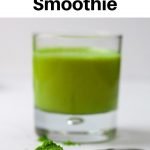 Try this recipe for a chilled banana and matcha smoothie! Made with just 3 ingredients: banana, matcha and coconut milk. It's an easy healthy drink that tastes great too! It's invigorating at breakfast time and perfect as a snack throughout the day.

But, I am always thinking of ways to add healthy habits to my daily routine. And an easy way to do that is to make more smoothies. I recently got some organic matcha for the first time and as a smoothie is such a simple thing, making a banana matcha smoothie seemed like a great way to use the matcha.

I love the combination of coconut and banana. Honestly, just by itself the banana and coconut milk makes a great smoothie, but the matcha just adds an extra dimension of flavour.

I'm not a tea drinker but I do like weak green tea and the teaspoonful of matcha added to this smoothie complements the banana and coconut without being too strong. You could add a little more or less matcha depending on how much you like it.

What ingredients do you need for this matcha smoothie?

This simple banana and matcha smoothie has just three ingredients. They are:

Can you adapt the smoothie?

Yes of course! This simple three ingredient smoothie is perfect if you want to make the smoothie really quickly and don't want to have to do lots of chopping before putting ingredients in the blender.

However, there are few ways you can adapt it a little. To make it a bit more substantial you can add a tablespoon of oats to the blender.

To add some extra flavour, why not add some spices? You can add a little of my favourite smoothie ingredient ever - ginger! Turmeric is another ingredients that goes really well with matcha and just a little bit is great in this. You can also try adding a tiny bit of cinnamon.

If you like a sweeter smoothie then add a little honey too.

Do you have to freeze the banana first?

Do you like your smoothies to be really chilled? If so, yes.

Personally I'm not bothered so I often skip this step (in the recipe card below). I keep the coconut milk in the fridge so that makes it chilled enough for me.

By the way, freezing fruit for smoothies is a great alternative to adding ice. It means you don't dilute any of the flavour.

What else can you make with matcha?

I have now made quite a few matcha and banana smoothies. However, I haven't been very adventurous with it in other ways.

It is a really healthy ingredient so I would like to do a little bit more experimenting with it. Cupcakes next maybe or possibly a matcha and chocolate mousse?

Matcha is full of antioxidants. Did you know it's got even more antioxidants than a cup of green tea? There are also claims it can help fight cancer, improve brain function and protect the liver.

You can read more about the health benefits of matcha here.

I love making smoothies and if you'd like some more smoothie recipes then do check out some of these recipes.

I've also got a Vita Coco banana blueberry and spinach smoothie as well as a banana, Nutella and avocado smoothie. 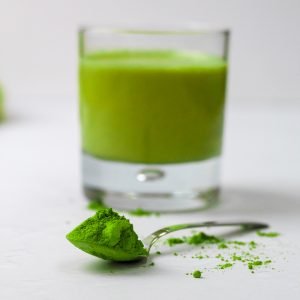